On Saturday 20th September, volunteers from the local area gathered together at the Loundsley Green Community Centre for a litter pick, a follow-up to our first ever community tidy up which took place earlier this year in May. Similar to our previous litter pick in the spring, we unfortunately weren’t blessed with the best weather as it was another wet morning; nonetheless this didn’t deter the small group of enthusiastic local residents who wanted to give up a bit of their time to make the area a tidier place to live. Following a quick safety brief and getting their hands on a litter grabbing device which was loaned to us by Chesterfield Borough Council, our volunteers keenly braved the damp weather to collect what dropped and windswept litter could be found. 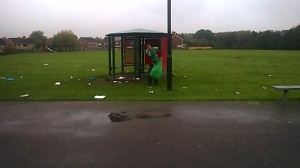 The areas covered by our mini-army of green-vested helpers were outside the shopping parade on Cuttholme Way, along Pennine Way which is the main road through the housing estate, and throughout Loundsley Green Park. There was a significant concentration of discarded litter around the seating area of the Skate Park where there is unfortunately no rubbish bin located, however this was swiftly bagged up by the team. As the weather cleared up a considerable about of litter was collected from the banks of the Holme Brook River, especially along the steeper bank which borders the shared cycle and footpath through the park. We’re glad that we were able to collect so much from this particular location at this time of year before the winds pick up in later in the autumn which risks the litter being blown into the river. One of our crew did come with his wellington boots and kindly offered to venture into the shallower parts of the river to pick what litter had washed downstream. 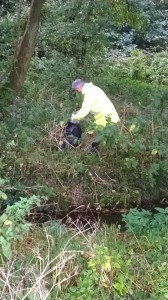 Having collected all manner of unusual litter including a bicycle frame, three odd socks, a car foot-mat and a cast iron water pump, the total haul came to 14 filled refuse sacks of litter in just two hours. Appreciation goes out to the volunteers, and we’ll be liaising with the borough council to investigate the feasibility of getting a litter bin installed on the park where it seems suitable. If anybody would like to be involved in a future litter pick or would like advice on how to set one up yourself, please get in touch with us! 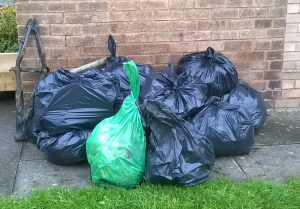